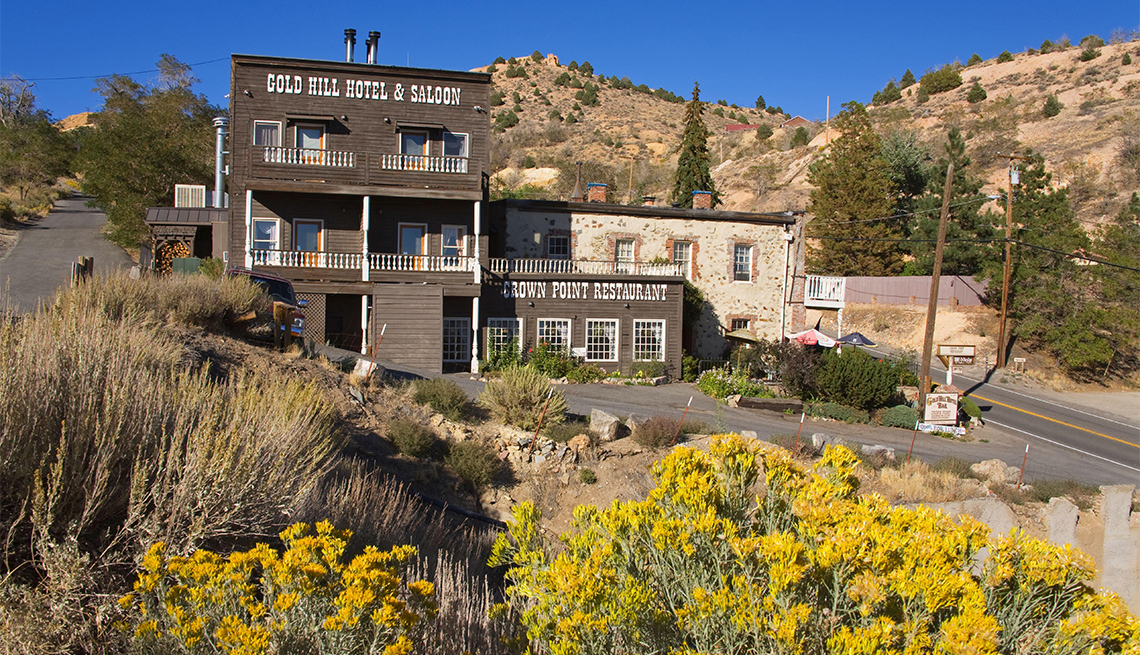 Dating back to the late 19th century, and possibly haunted by a lady of the night, Gold Hill Hotel is the Silver State’s oldest, built in 1859, five years before Nevada achieved statehood. That same year, miners uncovered the prosperous Comstock Lode nearby, turning the area into a booming mining hub. Nowadays, Nevada’s first hotel draws paranormal investigators and ghost hunters. Its rumoredto-be-haunted rooms, some more antique than others, were featured on the TV show Ghost Adventures. There’s also a restaurant and saloon on-site. Be sure to take a steam or diesel train ride up the hill to Virginia City. From $145; goldhillhotel.net; 775-847-0111.

Make like a caveman (but with plumbing and Wi-Fi) in a man-made, dynamite-blasted cave built into 60-million-year-old sandstone cliffs high above the La Plata River valley. With the temperature at a comfortable 65 to 68 degrees when open (March through November), the 1,700-square-foot cave has a bedroom, living and dining areas, a full kitchen and a bathroom, as well as two porches for watching the stunning Southwest sunsets above the Four Corners, where Arizona, New Mexico, Utah and Colorado meet. Guests may also spot wildlife, including squirrels, chipmunks and hummingbirds. The entrance is situated down a sloping path with stone steps, so pack lightly. Breakfast is included. From $340; kokoscave.us; 505-860-3812.

Treehouses aren’t just for the grandkids anymore. In fact, the Treehouse Suite at Highland Haven has its very own Tesla charging station. The swanky two-story, 850-square-foot space also boasts a chandelier, king-size bed, fireplace, wet bar and two-person steam shower. Built among towering blue spruce trees and joined on the property by cozy cottages, rooms and suites, the Treehouse is a romantic private hideaway for couples. Breakfast is served at the luxury inn every morning, and nighttime brings a free happy hour. $560; highlandhaven.com; 303-674-3577.